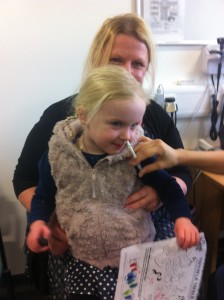 Figures released show that just a quarter of eligible toddlers have had their free flu vaccine in England. The uptake, so far, is down on the same point last year, which was the first time children were routinely immunised against flu.

Two and three-year-olds were vaccinated for the first time last winter and the programme has been extended to four-year-olds this year. But Professor Dame Sally Davies, said that parents are citing awareness as part of the problem with half of mums unaware that the vaccine existed or that children needed vaccinating every year.