GPs urge patients to self care for minor illnesses

Health commissioners in South Nottinghamshire have approved plans to limit 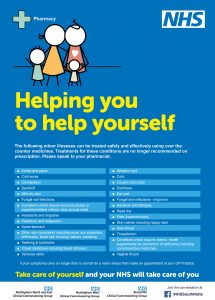 prescriptions for over the counter medicines (such as ibuprofen and paracetamol) for minor ailments, coming into effect from Wednesday 1 March 2017.

These plans mean that instead of receiving over the counter (OTC) products like paracetamol and antihistamines for short-term, self-limiting conditions on prescription, patients will be encouraged to self care and buy their own from their local pharmacy or supermarket.

Rather than visiting their GP, most people can take care of themselves when they have a minor ailment through a combination of self care and OTC medicines, which can be bought in supermarkets, shops or pharmacies.

Currently, GPs can prescribe OTC medicines to patients for minor ailments, but it is significantly more expensive for them to do so.

The total cost of prescribing OTC medicines for Nottingham North and East (NNE), Rushcliffe and Nottingham West (NW) CCGs in 2015 was £1,966,265. The CCGs estimate that by limiting prescriptions for OTC medicines for minor ailments across the three areas, they can deliver a saving of around £196,626.

On the whole, the patient engagement responses indicated that patients were comfortable with the proposal.

Where there were concerns, they were particularly focussed on the following issues:

We have taken these concerns into consideration. There are no plans to limit medicines for people with long-term conditions and GPs will be able to prescribe in other circumstances of clinical need.

“We’re pleased that, having listened to what patients say, they largely support us making these changes.

“Providing small quantities of over the counter medicines on prescription for minor ailments is not an effective use of funds. When these medicines are prescribed, we incur extra charges through dispensing and administrative fees, and if you include GP time then the costs are even higher.

“Basically what we are saying is that patients should not expect their GP to prescribe these medicines and products going forwards for short term illnesses, unless the GP deems there is a clinical need to do so.

“If the patient finds that their symptoms persist, of course they should then contact their GP Practice and arrange an appointment.”

Some facts and figures

Take a look at the self care leaflet