From installing wifi in waiting rooms to stress relief at the dentist, from more personalised advice directed at them rather than parents to a teenage A&E, there were great ideas a plenty at the our stall at the Carlton le Willows Academy Health Fair on Tuesday 1 July 2014. 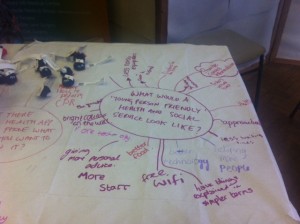 The fair is a partnership event between Working with Nottingham North and East CCG and the Academy and is the only event of its kind, which aims to give students, parents and carers the chance to access a range of health and social care services in the hope that providing advice and information at an early age may prevent the onset of major issues later in life.

Academy Healthcare Adviser Kay Cockayne said: “Early intervention is key – If we can give children information and resources early, hopefully it will prevent the big issues that some families find themselves dealing with later on.”

NNE Engagement Manager, Michael Ellis said: “The benefits of an event like this are two-fold. Firstly, in the NHS, we often find we’re hearing more from the older generation that the younger. It’s important that young people have a voice about how services will run in the future. 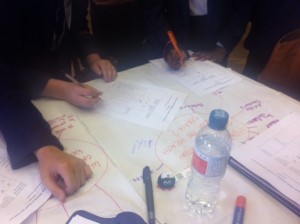 Filling in questionnaires and sharing ideas

‘Secondly, it’s also important that we can get some positive health messages out there and the range exhibitors who have agreed to attend has been great. the young people have had a great day getting involved in sports, using pedal power to make smoothies and learning about a diverse range of health related issues.’

As well as the smoothie bike from Gedling Services, other agencies holding a stall included: 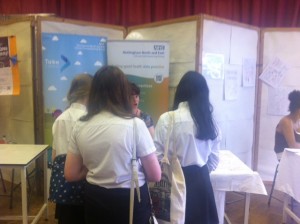 The NNE stand at the Carlton Le Willows Health Fair

Students also had the opportunity to take part in a number of fun physical activities including a series of mini challenges and target games provided by Gedling Borough Council.