Were you ever a patient of Mr D’Mello at Daybrook Dental Practice?

If you have, then it’s possible you may have been placed at a low risk of infection due to apparent poor hygiene standards. If  you’re concerned, please call: 03330 142479 or visit www.england.nhs.uk for advice. 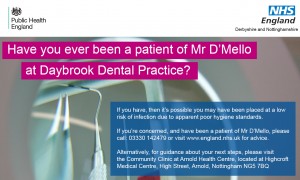 NHS England in Nottinghamshire has been working with Public Health England to investigate apparent breaches of infection control procedures by Mr D’Mello, who was contracted to provide NHS dental services at the former Daybrook Dental Practice.

In June 2014 NHS England was contacted by a whistleblower who had concerns about the standards of clinical care being provided to patients. The whistleblower provided NHS England with supporting evidence, including covertly-filmed footage of dentist Mr Desmond D’Mello.

Having reviewed the evidence, NHS England immediately ordered an interim suspension of Mr D’Mello and commenced an investigation into clinical practices at the dental surgery. That investigation is ongoing and no findings have been made at this time in respect of Mr D’Mello.

The investigation team has also consulted with clinical experts in Public Health England, who undertook a clinical analysis of the potential risk to patients.

Mr D’Mello has recently been tested by our Occupational Health Team and found to be clear of blood borne viruses. NHS England can therefore confirm that there is no risk of infection from Mr D’Mello himself.

However, Public Health England did identify that patients seen by Mr D’Mello appear to have been placed at a possible low risk of infection from blood borne viruses (hepatitis B, hepatitis C and HIV), due to apparent multiple failures in cross-infection control standards whilst undergoing dental treatment.

Based on this clinical advice, Public Health England has recommended screening for all patients who have been treated by Mr D’Mello. It is understood the number of patients affected who have been seen and treated by Mr D’Mello during his time at the former Daybrook Dental Practice is about 22,000, as he had worked at the practice for over 32 years. NHS England has since been working with partners to make the necessary arrangements for a patient recall.

Dr Doug Black, Medical Director for NHS England in Nottinghamshire, said: “Our investigation demonstrates that acceptable infection control standards do not appear to have been followed by Mr D’Mello whilst he was treating patients at the former Daybrook Dental Practice. Immediate actions were taken to protect current patients once these apparent lapses were identified.

“However, this alleged drop in clinical standards may have put people at a low risk of infection from hepatitis B, hepatitis C and HIV. Therefore, as a precautionary measure, we are advising all patients who have seen Mr D’Mello to seek further advice on what action they may need to take.

“A dedicated advice line has been established on 03330 142479 for guidance on how to access additional support and is available 8am to 8pm, seven days a week.

“We have also set up a Community Clinic for affected patients to provide further help and support. This is presently available 8am to 8pm, seven days a week, at Arnold Health Centre, located at Highcroft Medical Centre on the High Street in Arnold, Nottingham NG5 7BQ.