It’s time to talk about dying 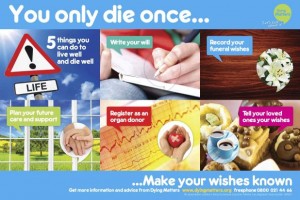 5 things you can do to live and die well

There are two events happening close to the Notttingham North and East area. They are:

Dying Matters –  what is important to you?

Dying Matters –  what is important to you?

For the West Bridgford and Mansfield events, which are aimed at health and social care practitioners, contact Halima for more details – halima.wilson@nottscc.gov.uk

The theme of Dying Matters Awareness Week 2014 is ‘You only die once’, or #YODO, an action-focused phrase emphasising that we only get once chance to have our dying wishes met, which is why it’s vital to talk, plan and make arrangements for the end of life – before it’s too late. Dying Matters will be encouraging members of the public to take five simple steps to make their end of life experience better, both for them and for their loved ones. These are:

Research for Dying Matters has found that many people have specific wishes about their end of life care or what they would like to happen to them after their death, but a reluctance to discuss these issues makes it much less likely that these will be met. There is a major mismatch between people’s preferences for where they would like to die and their actual place of death: 70% of people would prefer to die at home but more than half currently die in hospital.

“Every minute someone in England dies, but many people still feel uncomfortable talking about end of life issues. Talking about dying, death and bereavement is in everyone’s interests as it can help ensure that all of us can get the care and support we want, where we want it, at the end of our lives.

“Through being more confident in talking about dying and taking the five steps we are promoting during Dying Matters Awareness Week to plan for the future, we can make a big difference.”