We’re pleased to be supporting the new Dementia Friends campaign to help people develop an understanding of dementia and turn it into action to help people in their community living with the disease. 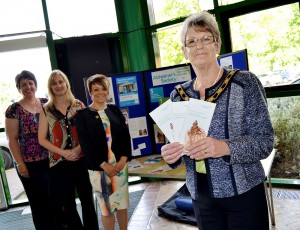 Dementia is arguably the biggest health crisis facing the UK: there are currently 665,065 people in England who have dementia and an estimated twenty-one million people in England have a close friend or family member with dementia– because they live with or care for someone who has dementia. In the area served by NHS Nottingham North and East CCG, there were 1,000  people diagnosed with dementia last year.

The campaign, launched by Public Health England and Alzheimer’s Society, is encouraging people in Nottinghamshire to become a Dementia Friend by watching an interactive video online to increase their understanding of the disease and implementing their experience on a daily basis.

“As a GP I often deal with the effects of dementia and it always saddens me to see the devastating impact it can have on the lives of those affected.

“I would always encourage people to try and appreciate the challenges people living with dementia have to overcome on a day-to-day basis, and one of the ways they can do this is by becoming a Dementia Friend.

“Becoming a Dementia Friend will not only help you understand what it means to suffer from dementia, it will also mean you are playing a crucial role in helping us create a dementia-friendly society.”

The campaign aims to create a network of one million Dementia Friends across England by 2015. As part of the campaign, adverts will appear on TV and online from 7 May 2014.

For further information on the campaign and how to become a Dementia Friend, please visit www.dementiafriends.org.uk